With Boris Johnson announcing a gradual unwind of the lockdown on Sunday night, I have been persuaded by our chief executive to take up the economics textbooks I thought I had left behind many years ago to ponder the impact of the coronavirus on our economy.

Regular readers of this blog will know I’m not the only one scratching my head. I was rather shocked by the gloomy predictions of my esteemed colleague, David Cule, in his blog earlier this month!

Myself, I had taken Rishi Sunak’s announcement of a £350 billion blunderbuss to support the economy as proof we would be able to put a large part of it into the deep freezer and, hopefully, pop out the other side with limited damage.

Looking for data, I turned first to the Office for Budget Responsibility, (“OBR”) which published a scenario for the impact on government debt and the economy on 14th April.

The OBR assumed lockdown would continue in full through Q2 (April, May and June) with approximately half the economic impact of the restrictions falling away in Q3 (July, August, September) as the lockdown unwound with a reversion to Q1 levels of economic activity (January, February, March) by Q4 (October, November, December).

In order to assess the Q2 picture, the OBR took the breakdown of UK GDP by sector and, in line with other mainstream analyses, applied various haircuts reflecting these sectors’ ability to operate, as the following table shows:

Output losses by sector in the second quarter of 2020: 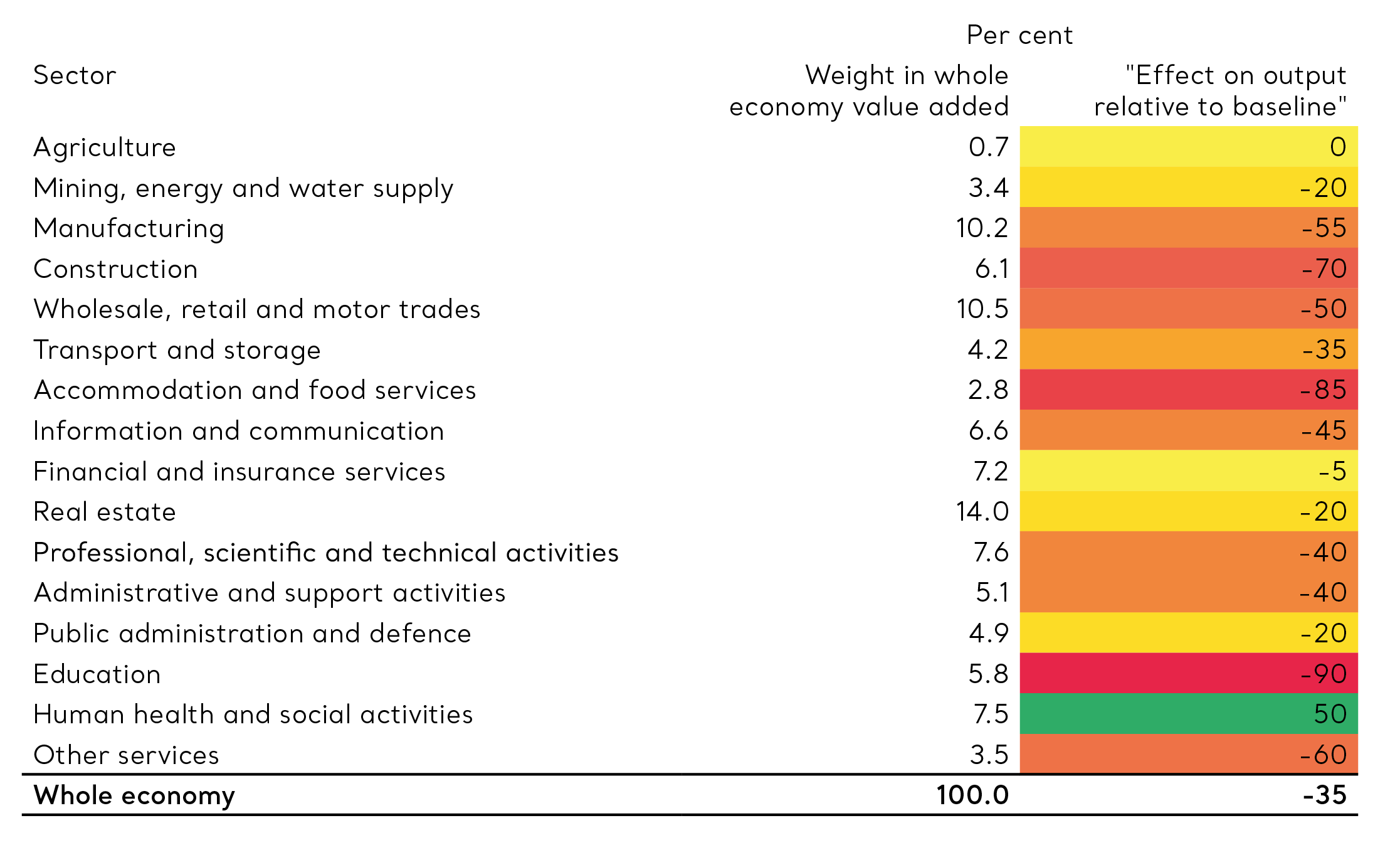 Unsurprisingly, with schools and universities closed, the economic output of the education sector is severely curtailed. And the extra resources being pushed into the healthcare sector are obviously the only bright spot in an otherwise pretty awful scenario.  The economy is running in Q2 at about two-thirds of the rate of Q1 with 35% of productive resources standing idle for now.

To the casual observer, this looks about right, especially when you look at the components of GDP as summarised in the table.

The final assumption the OBR made was that there would be no impact from Q4 onwards.

Unfortunately, whilst I started the lockdown thinking that this might be possible, events have overtaken us, and we can now quite clearly see that there will be two factors to consider that will affect Q4 or beyond:

However, even with the best laid plans, there are problems and so it turns out with a plan made in a rush to put the whole UK economy in a three-month deep freeze. Gaps appeared, too much of the cash was in guarantees, not spending, confidence was rocked and economic damage caused.

Placing any sort of value on these at the current time is speculative but let’s speculate!

Having considered the breakdown in GDP and what can happen with different sectors, I suspect I am relatively relaxed about the impact of social distancing.  Yes, going to the pub will be strange and awkward.  The office will have sanitizer everywhere and you will only actually go in person on special occasions.  But most of the economy will be able to work around the rules and deliver the economic output.

The hysteresis factor, about which I was previously fairly relaxed, has become more important.  The gaps in the package have led to job losses and damage.  Consumer confidence is low and will take time to recover.  I expect this factor to be significant – equivalent to a mild recession, perhaps.

Overall, I might expect Q4 would be down about 5% on Q1 because of social distancing and the hysteresis caused by the lockdown.

I can see arguments for a softer impact and, indeed, a considerably higher one but, looking at economic history, it seems hard to think this could be more than a double-digit percentage.

Fortunately, we don’t have to rely solely on my subjective views, as we have the Bank of England’s latest Monetary Policy Committee meeting minutes to hand which included their own more recent projections.

Compared to the OBR, the Bank of England assumes economic damage started in Q1, reached a nadir of 30% down in Q2 (compared to 35% from the OBR), and will bounce back in Q3 (but not as fast as the OBR predicts), before accelerating in 2021.

We can summarise all this in my following chart.

This shows the previous trend for GDP growth as the starting point (the blue dash line) with then the OBR projection superimposed (in dotted lines) with various different levels of damage in Q4 from social distancing and hysteresis from 2.5% of GDP up to 12.5% of GDP.

On top of this I have drawn the bank’s scenario and also an interpretation of the comments of my colleague, David Cule.

Finally, for reference, I have added the movement in GDP during the financial crisis rebased to start from Q2 onwards. 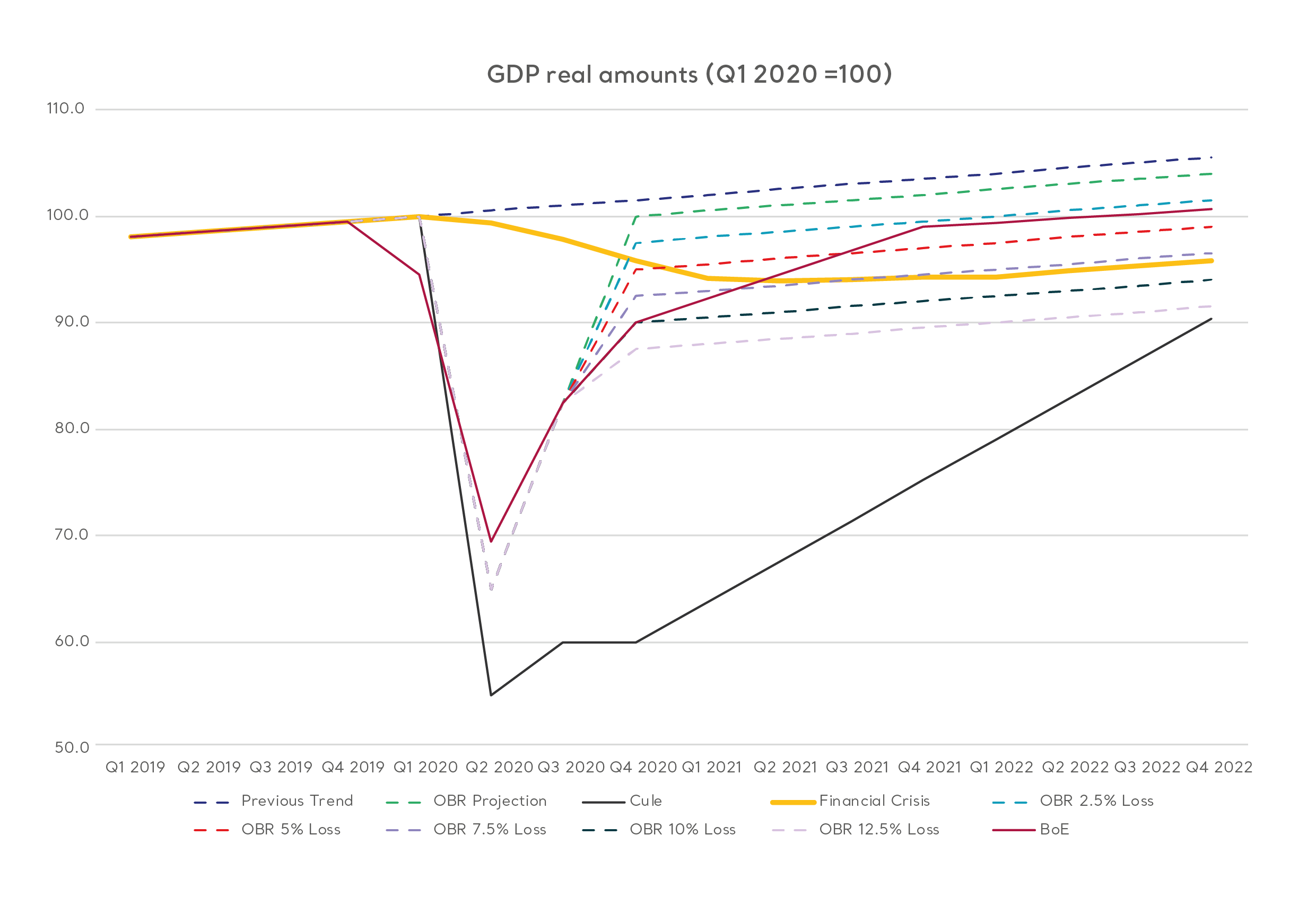 The first obvious point is that this is nothing like the financial crisis – that was a gradual decline in the economy over a number of quarters followed by a period of stagnation and eventually a return to growth. Here one third of the economy is being turned off.  And then, carefully but quickly, turned back on again.

The red dotted line is about where I am at currently (5% down).  I would hope for the blue dotted line (2.5% down) but that would require consumer confidence to return very quickly.

The Bank of England scenario, whilst starting earlier and recovering more slowly does, due to the acceleration in 2021 end up being slightly more optimistic than my projection.

So what is the economic damage caused by coronavirus?

Well, we will take a hit to long term growth that will put us behind where we would have been otherwise – probably by the amount equal to a mild to normal recession.

Furthermore, we have had a weird three to six-month partial economic holiday during which the government borrowed lots of money to support the economy which will add a big chunk to the national debt.

Finally, I turn to Mr Cule’s scenario (the dark grey line - and it is very dark and very grey) and I pray that he is incorrect!

What is the economic damage caused by coronavirus?

How a Midlife Review can attract and retain top talent

Where there’s a Will, there’s not always a way to pass on your pension

Unlike me, you probably don’t spend the majority of your time advising people on their..

END_OF_DOCUMENT_TOKEN_TO_BE_REPLACED

City centred or suburban slanted: how will where we live change?

Among my musings of the past three months was the observation that COVID has altered how..

END_OF_DOCUMENT_TOKEN_TO_BE_REPLACED

A little help from our friends

“A Little Help from Our Friends” “What do I do when my love is away? Does it worry you to..

END_OF_DOCUMENT_TOKEN_TO_BE_REPLACED

Luck or foresight? How an IT initiative shielded us from the pandemic

It was Niccolò Machiavelli who wrote, more than five hundred years ago, that one should..